Scottsdale-based 1784 Capital Holdings, LLC, has purchased five acres located at 4725 E. Dynamite Blvd. in Cave Creek. The developer of high-end self-storage facilities plans to create a state-or-the-art facility on the site. “This area in the northern portion of Metro Phoenix is one of the most fast growing in the state,” says Shane Albers, chairman and CEO of 1784 Capital Holdings. “As residential and business growth expands in the area, we see an opportunity to provide

Water Releases through Valley to End this Weekend : SRP Storage System at 77 Percent of Capacity

Salt River Project this weekend will stop releasing excess water from the two reservoirs on the Verde River with snowmelt runoff conditions diminishing on the Verde and the prospect of additional significant storms lessening considerably. SRP’s six reservoirs on the Salt and Verde rivers have received about 900,000 acre-feet of runoff from snowmelt and precipitation on the 13,000-square-mile watershed since the start of the 2019 runoff season on Jan. 1, said Charlie Ester, ma

For decades I’ve been among the many motorists driving by the semi trucking school, located at the I-10 and I-17 intersection, known to locals as “The Stack.” When Arizona Contractor & Community decided to do another special issue on trucking, I took the exit ramp and explored the school. On the grounds, I first noticed a 1954 “needle nose” Kenworth, before an employee directed me to where I would find Jay McCormick “Mack” Sheesley, the owner of a fleet of vintage semis. Soon

Rosendin, one of the nation’s largest employee-owned electrical contracting firms, is proud to announce recognition for its local workforce. In the last month, Rosendin was honored for safety excellence on the Tempe Streetcar project, ranked as a top training program and named one of the region’s largest electrical contractors. Stacy and Witbeck, the civil contracting company building the Tempe Streetcar, awarded Rosendin employees the Safety Crew of the Month for February. 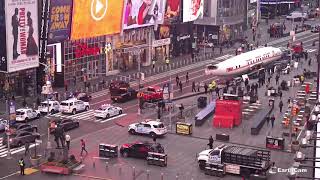 Construction for the new TWA Hotel at JFK Airport is nearing completion and a very unique component of the hotel made a special appearance in Times Square over the weekend. From March 23-24, the 1958 Lockheed Constellation “Connie” airplane bound to become a cocktail lounge toured through the heart of New York City and EarthCam captured footage of the special event. The vintage plane’s appearance drew a massive crowd of more than 400,000 visitors, including Mayor Bill de Blas

Irgens - Phoenix has announced the groundbreaking of its newest development, 17 Three Hundred at Perimeter Center. The two-story, Class A office building, which is located at 17300 N. Perimeter Dr. is scheduled for completion in October. “This project is the second building within the Irgens Perimeter Center project,” says Jason Meszaros, senior vice president and managing regional director of Irgens. “The building is already attracting substantial tenant interest and we an

Arizona has its share of monsters lurking in the great outdoors. There’s the Gila monster, a venomous reptile with steel-trap jaws. There’s allegedly the Mogollon Monster, a relative of Bigfoot with an offensive body odor. Perhaps the most intimidating beast, however, is “The Monster,” a creature that could lift 125 tons, was 78-feet long, and could travel at 40 mph. “The Monster” wasn’t created by a mad scientist, but rather Cecil A. Pelts to transport massive loads. A heav

IREM® (Institute of Real Estate Management) will recognize the best of the best in the real estate management profession this year with the 2019 Real Estate Management Excellence (REME) Awards. Individuals and companies within any asset class and of any size can enter a submission of their own, or nominate others to be considered for an award in any of the six available categories. All finalists will be recognized and the winners will be announced at the Inaugural Gala and

How did you get your start in the building industry? While in high school in New Jersey, I took a drafting class. Hooked on day one, I went so far as to intern for a real estate developer right after graduation. This led to me moving across the country to Arizona in 1987 – site unseen – to take advantage of ASU’s award-winning construction program (now called the Del E. Webb School of Construction at ASU). As a college sophomore, I jumped at the chance to intern early yet aga 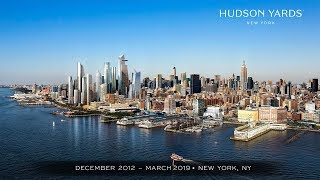 Hudson Yards in New York City officially opens to the public tomorrow, March 15. To celebrate this milestone, EarthCam is premiering its new 4K construction time-lapse movie for the massive development. From December 2012 to March 2019, EarthCam’s cinema-quality gigapixel cameras documented each stage of Hudson Yards, the largest private real estate development in the history of the United States. More than 3 million megapixel photographs and 500,000 hours of imagery were arc

A new study from nonprofit Transamerica Center for Retirement Studies (TCRS) released recently illustrates the retirement-related issues faced by workers in physically demanding jobs (physical workers) and offers actionable insights. The report, The Unique Retirement Challenges of Workers in Physically Demanding Jobs, finds that only 31 percent of physical workers in the U.S. and 21 percent globally feel they are on track to meet their retirement income needs. Key findings in

The book, A Guide to the Architecture of Metro Phoenix, published in 1983 included a small office building in central Phoenix that resonated with me. A very skilled hand was behind its design: architect John S. M. Hamilton, Jr. AIA. A few years later, I realized Hamilton had designed the Larson Residence in Paradise Valley. So it was my special treat these many years later to interview the 85-year-old architect. Hamilton was born 1933 in Stanford, Connecticut and attended Fo

Sperry Equities of Irvine, CA has purchased the Midtown Phoenix high-rise at 2020 N. Central Ave. This marks Sperry Equities’ 10th purchase in Metro Phoenix in the last 24 months, and its first purchase in the Arts District of Midtown Phoenix urban office submarket, with plans to purchase another $100 Million of real estate in the Phoenix market within the next 12 months. “2020 on Central benefits from the remarkable resurgence in the Midtown corridor,” says Mindy Korth, exe

The Laguna Village apartment community at 102 Palomino Dr. in Chandler has been sold to a Utah based investor for $70,250,000.00. The buyer intends to complete modernization of the 460-unit property and increase the development’s value within a submarket that has recently experienced strong population growth. “This property is ideally suited for upgrades and re-positioning,” says Cindy Cooke senior executive vice president of Colliers International in Arizona. “Laguna Villa

Bill Brake calls his years at Sahuaro Petroleum & Asphalt some of the best of his life. He started as a salesman, and then later became president of the company that pioneered rubberized asphalt. “Probably nobody knows it started in Phoenix, Arizona, in the ‘60s,” Brake says. Sahuaro Petroleum began with two men in 1961, Doyle Willis and Warner Gable, on 19th Avenue, just north of Van Buren Street. At the time, there were only two companies that distributed liquid asphalt: Ch

UEB Builders, an Arizona based general contractor firm, is pleased to announce the addition of Alexis Carver and Blake Keinanen as project executives to its growing office in Scottsdale, Ariz. Founded in 2005 by Tom Keilty and Mike Hurst, UEB has grown from a three-person company to one with more than 180 employees. From offices in Scottsdale, Dallas and Seattle, UEB serves a multi-state market specializing in multifamily, office, hospitality and commercial projects. Notable

McCarthy Building Companies Inc. (www.mccarthy.com) recently promoted Kristine Newman to senior vice president, finance with McCarthy Holdings Inc. She is responsible for creating strategies to deploy and diversify capital for the benefit of the employee-owners of the national builder. In her new role, Newman reports directly to McCarthy Holdings Inc. Chief Financial Officer Doug Audiffred. She is a Certified Public Accountant (CPA) and holds the Certified Construction Indust